In commemoration of 9 December 2017, International Anti-Corruption Day, a UN-designated day to raise awareness of corruption around the world, Corruption Watch has released a satirical animation video that highlights how corruption affects us all and why it matters to hold our leaders to account.

“#Wepay” is the product of a partnership between Corruption Watch and a team of animators, script writers and comedians. It aims to demonstrate how small and large acts of corruption can have dire consequences. The message is packaged in an entertaining and lively style, using animated ostriches, dancing sheep and officials with cabbage heads to show how government works and what happens when things go wrong. At the same time, the video educates the public about the way in which public money is allocated and spent, and that when it is misused, it amounts to depriving the public of what is rightfully theirs.

Comedians add local flavour and humour to the script and narration, and the use of animation is a highly effective way of simplifying complex issues. The result is funny, irreverent, informative and thought-provoking, leaving people to mull over its content long after watching it.

On this day, Corruption Watch urges the public to be #UnitedAgainstCorruption and challenges them to take 7 minutes to support this global movement by watching the video and sharing it across all their social media networks.

Corruption Watch will also host a talk-show-style event, #CWLive!, with Gugulethu Mhlungu as the host. The event will be filmed, and the focus will be on major corruption highlights during 2017 and their impact on all people living in South Africa – particularly young people. The audience will be comprised of young people, members of civil society organisations, and community leaders.

The details of the event are as follows: 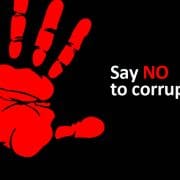 Are you complicit in corruption?
Scroll to top