We, citizens and residents of South Africa, have gathered here in our thousands today under the banner of Unite Against Corruption to tell the government that we have had enough of corruption, which is crippling our economy, destroying jobs, stealing from the poor, sabotaging service delivery and undermining the basis of our democracy.

We have had enough, and so we insist that government and big business prioritise combating corruption and acts speedily to bring those guilty to justice and we make the following specific demands:

In order to combat corruption in those sectors that produce basic goods and deliver basic services:

In order to achieve accountable and transparent leadership:

In order to achieve effective enforcement and implementation of anti-­corruption laws:

In order to protect our whistleblowers:

In order to guaranteed greater respect for those charged with combating corruption:

In order to achieve greater accountability from business:

In order to ensure transparent regulation of public procurement:

In order to prevent corruption leading to job losses:

Unite Against Corruption : the struggle continues 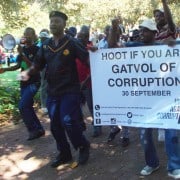 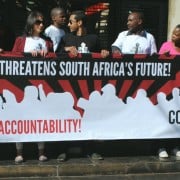 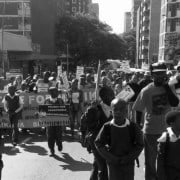 The march to stop corruption
Scroll to top