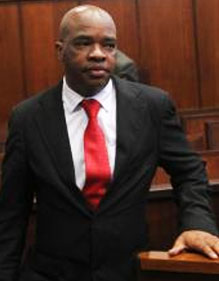 Our hero this week is the KwaZulu-Natal justice system, which last week sentenced former provincial police spokesman Vincent Mdunge to five years in jail for fraud and forgery over a fake matric certificate.

Mdunge has been granted leave to appeal but, added Durban Regional Court magistrate Thandeka Fikeni, “There is absolutely nothing respectable about white collar criminals and crime. Society always looks to the police as people who are law abiding.”

The appeal, which would be heard in the Pietermaritzburg High Court, could take up to two years to conclude.

Fikeni also explained that the apparent leniency of the sentence came after a consideration that Mdunge was a first offender, had co-operated with the police, was married with five children and was now unemployed.

Mdunge was a colonel when he left the police force in 2013, soon after the allegations broke. When the provincial commissioner decided to institute disciplinary charges against him, he submitted his resignation, which was accepted. He was charged with forging his matric certificate and fraudulently accepting a salary to which he was not entitled.

People who hold prominent positions in the public sector and whose salaries are funded from taxpayers’ money, have been told through this example that they too are bound to abide by the law, and that there are consequences for failing to do so.

Excerpt
Our hero this week is the KwaZulu-Natal justice system, which last week sentenced former provincial police spokesman Vincent Mdunge to five years in jail for forgery over a fake matric certificate and fraud because he drew a salary to which he was not entitled. The court has set the example of showing that even top officials are not above the law.
File Upload