The inside scoop on corruption in SA Corruption Watch has released its second annual report. The publication, which for the first two weeks will only be accessible online at the new Corruption Watch Connected community platform, reveals that the watchdog organisation has received a total of 5 482 reports of alleged corruption in the two years since its inception.

Of these, 2 262 or 41% were submitted in 2013, but the overall quality of the reporting – the clarity or amount of detail given – was much improved from the year before. This is important because it means that last year more reports could be acted upon than in 2012.

This is seen in the number of cases representing actual corruption – understood as abuse of public power and resources for personal gain. These increased from 38% in 2012 to 58% in 2013.

"The latest data indicates that people understand that Corruption Watch is here to amplify the public’s voice on abuse of public resources instead of dealing with consumer or labour disputes,” said executive director of Corruption Watch, David Lewis.

The annual report highlights numerous areas in which Corruption Watch has made progress, provides facts and figures on who our reporters are and their reasons for reporting corruption, where our reports originated, and also gives details of several successful investigations of individual acts of corruption concluded by the organisation.

To read all about these matters, as well as which public sectors are most affected by corruption, how South Africa compares to other Brics nations on corruption, how corruption manifests in schools, and more – visit our online annual report at the brand new Corruption Watch Connected web platform.

The report will be exclusively accessible online for two weeks, 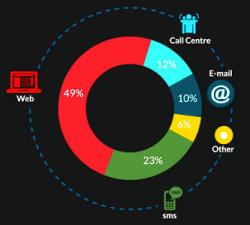 Once you’ve registered with Connected, you can sign in to join groups, subscribe to information, and make friends. In groups, you can upload videos and photos, comment on blogs, participate in discussions, and contribute in other ways too. As a building block of collaboration, groups allow people to work together using tools like activity updates, blogs, calendars and shared forums.

Another group activity involves projects, which allow groups of people to work together toward a common goal – using tools like plans, task lists, shared forums and documents to keep everyone on the same page and working efficiently.

If you have an upcoming corruption-related event, you can share it, and contribute to past events using tools like photos, blogs, reviews, wiki and discussion forums

On a personal level, you can blog, add photos and videos and connect to other people. To make friend, you simply go to PEOPLE, and click on Ask to be a Friend. This will send a message which the individual can accept. NACS discussion document: what's it about?

Billions of taxpayers’ rands down the drain again
Scroll to top