Call for transparency and meritocracy in public service 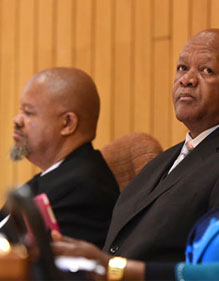 With a committed attitude of integrity in public servants, South Africa can very well start winning the fight against the scourge.

These were the views shared by a panel that led discussions at the annual commemoration of International Anti-Corruption Day in Pretoria on Tuesday. The event, jointly organised by the Public Service Commission (PSC), the UN Office on Drugs and Crime (UNODC) and Unisa, ran under the theme Breaking the corruption chain and encouraged delegates to live the spirit of stopping corruption by adopting a no-tolerance attitude towards it.

Former chairperson of the PSC, Stan Sangweni, encouraged people in the public service to live the integrity creed in their daily work. This, he said, is where the fight against corruption in public office starts, with ethics driving their work so that they can deliver quality services to citizens.

“You don’t have to invent anything, the guidelines are clearly stated [in the Constitution],” he said. Sangweni urged public servants to embody what he called the “big five” values of public office: fairness; transparency; ethical conduct; accountability; and meritocracy.

“Next year, on this day, we should be talking at length about how we can recognise the big five.“

State has systems to fight corruption

The keynote address, delivered by Minister in the Presidency Jeff Radebe, focused on the systems established by the state to deal with corruption within its ranks.

“…the national security strategy adopted by government in 2013… declares corruption as one of the key threats to South Africa’s national security,” said Radebe. The Medium Term Strategic Framework, which is in place for the era of the current administration, notes that local and foreign investors are not willing to invest in the country on account of perceptions of high levels of corruption, he added.

Since 2009, Radebe said, 298 investigations had been carried out by government agencies probing corruption. “During the same period successful convictions of 48 individuals, for corrupt activities involving R5-million or more, were obtained.  In addition a list of the names of 42 people who were convicted for corruption was released as an effort to name and shame them.”

Radebe also noted the recent Corruption Perceptions Index (CPI) released by Transparency International, which saw South Africa move up five notches to a more favourable 67th place, from 72nd in 2013. “One of the major challenges we must overcome as we grapple with the ogre of corruption are the perceptions held domestically and internationally about the extent of corruption in our country.

“These [CPI] results are a fitting testimony that we are on course to meet the MTSF target of improving our ranking to be below 50.”

Co-operation with international structures fighting corruption is also key, said Radebe. “In its efforts to create an enabling domestic policy framework for strengthening preventive and punitive measures, South Africa has ratified and acceded to prominent international conventions for anti-corruption, and is an active participant in relevant inter-governmental bodies and forums.”

Progress made, but more to do, says Ban

On this note, UNODC senior advisor Tim Steel said the harmonisation of efforts with regional organisations such as the African Union are still a work in progress, but something that the UN is committed to.

A message of support from UN secretary-general Ban Ki-Moon, read by Steel, reiterated the importance of a collective effort by countries to combat corruption.

“To dismantle corruption's high walls, I urge every nation to ratify and implement the UN Convention against Corruption. Its ground-breaking measures in the areas of prevention, criminalisation, international co-operation and asset recovery have made important inroads, but there is much more to do.

“Public services must uphold the highest standards of integrity and ensure that appointments are driven by merit. Public servants, as well as elected officials, must be guided by ethics, transparency and accountability.”

Excerpt
South Africa can win the fight against the scourge of corruption, said speakers at yesterday’s commemoration in Pretoria of International Anti-Corruption Day – but officials must embody the “big five” values of public office: fairness; transparency; ethical conduct; accountability; and meritocracy.
File Upload

South Africans’ reasons for not reporting corruption
Scroll to top