The Arms Procurement Commission wrapped up at the end of June, after closing arguments had been presented by the interested parties that testified. In this three-part series, we summarise closing arguments from the evidence leaders, the government departments involved, and the arms dealers.

Arms deal companies sang from the same sheet – denying any impropriety in securing the tenders to supply arms to South Africa.

In their closing submissions to the Arms Procurement Commission, Saab, BAE and Ferrostaal denied any wrongdoing and insisted they had fulfilled their obligations.

Critics have long alleged the manufacturers paid bribes to secure contracts and also failed to deliver on their industrial participation – also known as offsets or counter-trade – obligations.

Swedish newspaper Expressen reported in late June that Saab confirmed it had made “large payments” to agents to secure the Gripen and Hawk tenders, but insisted it was legitimate to hire consultants. The company’s director for South Africa at the time, Jan Närlinge, told the newspaper he tried to raise the alarm about shady agent contacts, but encountered only silence.

Närlinge said he realised at an early stage that things were not quite right at BAE, the British defence giant that had been given principal responsibility for marketing the Gripen and Hawk.

“My opinion is that BAE was trying to hide what they were doing. We were two companies working closely together trying to achieve a deal together. Starting to keep each other in the dark was not a good idea,” he was quoted as saying.

Närlinge told Expressen he had a feeling that BAE’s activities were shady and even met South Africa’s then president to find out what was going on.

Proud of its aircraft

But Saab, who supplied 28 Gripens for $1 514-billion, argued in its closing submission that it had “acted lawfully at all times in the procurement process, and in the negotiation and execution of the Hawk/ Gripen acquisition contract”.

The Swedish arms manufacturer said there was “no evidence of any wrongdoing whatsoever on its part in relation to the SDPP (strategic defence procurement package)” and pointed out that a 2007 investigation by the Swedish Prosecutor’s Office into alleged improper business practices in connection with Gripen export activities was closed without any charges being laid against Saab, any of its employees or directors.

Saab said it was “proud of the Gripen aircraft system that it supplied to the South African customer”.

“Saab submits that it performed its tasks professionally, with a high degree of integrity and to the satisfaction of the customer, and has also made a lasting (and ongoing) contribution to the development of the high technology defence industry in South Africa,” the dealer argued.

Meanwhile, its partner BAE, who landed the contract to supply 24 Hawks for $624-million, said its aircraft was “superior and overall more cost-effective” than a cheaper rival which it controversially edged out.

It said the Hawks it supplied to South Africa “represent a new generation of aircraft” and had been consistently selected in competitive tenders.

It argued that it and Saab’s total industrial participation amounted to $8.7-billion, “almost 400% of the contract value and represented an offer which substantially exceeded the stated requirements for both DIP and NIP requirements”.

Payments were above board

Regarding allegations of suspicious payment made to Defence Minister Joe Modise’s special adviser Fana Hlongwane, BAE admitted it had paid £115-million to advisers it engaged in South Africa. But it argued that the use of advisers “by international companies exporting to countries where they have no in-country capability or staff was, and is, commonplace across many industries” as it offered a “lower cost base for long lead time programmes”.

It said the advisers assumed all financial risk of the procurement process which BAE had estimated would have amounted to £4.2-million annually over more than 20 years. “The SDPP contracts were in excess of £2-billion … The actual spend on advisers in relation to BAE and Saab was well within what any company bidding for contracts of this sort would have expected to incur,” BAE argued.

It pointed out that many investigations had been conducted into the conduct of its advisers and none had uncovered any evidence of unlawful conduct.

BAE argued that its guilty plea agreement with the US authorities relating to its business practices did not relate to its activities in South Africa. BAE said it was proud of its partnership with the country and it had met its obligations to the satisfaction of South African authorities.

Ferrostaal, which was part of the German Submarine Consortium that won the right to supply three submarines to South Africa and whose responsibility it was to offset the NIP obligation and the majority of the defence industrial participation (DIP) obligation, said it had met its obligations.

It asserted that its Debevoise & Plimpton forensic report (that purports to show evidence of bribery in the arms deal) was subject to legal privilege and therefore should not be admitted as evidence by the commission. Critics of the deal had contended the report was in wide circulation and therefore could not be considered privileged.

Evidence of corruption is there

Meanwhile, in his submission, whistleblower Richard Young urged the Commission to admit into evidence reports from foreign investigative authorities into impropriety in the German Frigate Consortium which won the right to supply four corvettes to South Africa.

“There are substantial allegations of corruption in respect of corvette platform involving the GFC. These allegations arise out of very extensive investigations undertaken in the 2006 to 2008 era by the statutory investigation authorities in Germany, in particular those based in Dusseldorf … I would submit that these documents are first of all very important and directly relevant to the terms of reference of the APC. Equally important is that they are indeed genuine,” he argued.

He said there was also proof of corruption in the corvette combat suite. “It is a legally accepted fact emanating out of the Schabir Shaik trial that Thomson-CSF paid amounts of money to Jacob Zuma in respect of Project Sitron. Schabir Shaik was found guilty of corruption in his trial and sentenced to 15 years of Incarceration. It is accepted fact that these payments were made in respect of Thomson-CSF’s stated requirement for protection during the investigation into the SDPs and in particular regarding Project Sitron and Thomson-CSF’s only role therein …”

It was logical to conclude that the company had to want such protection for some good reason, as an entity would not pay R500 000 per year for such protection if there had not been prior unlawful conduct.

Young argued that Hlongwane – who has been accused of receiving kickbacks from BAE – had not been truthful with the commission and that his evidence should be dismissed. 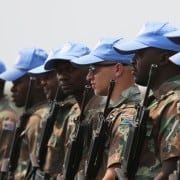