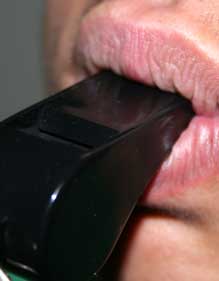 Three officials at Dr JS Moroka municipality near Witbank in Mpumalanga have been suspended after a Corruption Watch investigation exposed some very dodgy spending by procurement clerks employed by the municipality.

Corruption Watch was alerted to the case when the accounting officer at a private company, who had been involved in supplying equipment to the municipality in the past, picked up on the crooked deal and tipped us off. In our exposé, we labelled Dr JS Moroka our zero of the week.

Municipal manager Zamani Mcineka has taken a no-nonsense approach to our findings: “I have suspended the three officials implicated in your enquiry. This follows an investigation conducted internally,” he told Corruption Watch. “As a matter of procedure in terms of the Collective Agreement on Disciplinary Code and Procedure, [a] disciplinary enquiry is being instituted.”

Mcineka has not disclosed the names of the individuals who have been suspended with pay, until they have been formally charged by the municipality. “The council has taken a decision to implement a full forensic audit in every department, including mine,” he said. “We believe that some people and service providers are using the municipality as a cash cow.”

The full forensic audit will be completed by Sizwe Ntsaluba Gobodo, the audit and advisory service firm. “I wouldn’t be surprised if people handed in their resignation by the end of the investigation,” Mcineka said.

The municipal manager added that in the last six months, the National Treasury had been to the municipality twice for training and that there was nothing wrong with its current procurement policy, but with the implementation of the rules. “It’s not the policy, it’s the people,” he said. “It’s a question of reinforcement from my side and [from] management.”

Over the last few months, Corruption Watch has travelled a rocky road with the municipality. After a three-month investigation into the municipality’s purchasing of 12 special glass vials for an inflated price of more than R20 000, it was found that procurement officer Rabelani Thukwana had given the contract to her husband, Sipho Thukwana, owner of Sinqobile & Jose.

When asked if he would be pressing charges against Sinqobile & Jose, Mcineka said he would wait for the findings of the auditors and hopefully would be prosecuting this company alongside other culprits who had been milking the municipality.

Corruption Watch had handed over all the evidence to the procurement manager, municipal manager and mayor. However, after weeks of being promised answers and waiting for a response, the municipality’s public liaison person, Mmasabata Ramatsetse, said that she could only say that there was an internal investigation.

In April, Corruption Watch made Dr JS Moroka Local Municipality a zero of the week for a lack of action and transparency. Last week, Mcineka finally responded to some of our questions and the embarrassment of being labelled a zero.

“In the main, commissioning of a fully fledged forensic investigation has been approved by Council and the process relating to the appointment of a suitably qualified service provider has been concluded and such investigation will commence in the next two to three weeks and this excludes the process relating to the three officials referred to above,” he wrote in an email. “I trust this will build confidence in you, your organisation, the media houses and the community who have or have developed a perception that the municipality is zero.”

Corruption Watch originally received the information from the incident reporter on our website. The tip off came from an employee at a Johannesburg laboratory equipment company. Greg Dinwoodie is an accounting officer at Selectech; his company had been supplying the municipality with vials at R2 000 for a set of 12. In October 2012, Dinwoodie received a strange email that included an official purchasing order invoice for a set of 12 vials, valued at R24 000 – a mark-up of more than a thousand percent. He knew something was fishy and instead of just ignoring the invoice, he sent the information to Corruption Watch.

“Can you believe it? Wow, that is actually good news,” Dinwoodie said after hearing about the suspensions. “You are making a better South Africa and I am glad I came to you.”

Mcineka was also happy that Corruption Watch had stepped in. “Thank you, because I would not be aware of this if it were not for your organisation,” he said.

Corruption Watch will keep following this case for any future developments.

Excerpt
Dr JS Moroka Local Municipality has acted after being labelled a zero following a report of some very dodgy spending by a procurement officer employed by the municipality. The municipal manager has responded to the report with some good news – and thanks Corruption Watch for bringing the matter to his attention.
File Upload

Taking Corruption Watch to the people