Our heroes for this week are the members of the parliamentary ad hoc committee to select a new public protector. Given what is arguably a far from easy task – transparently and constitutionally appointing the best person to replace one of South Africa’s most admired public figures – the members deliberated robustly and sometimes heatedly, but in the end professionalism and reason were the order of the day and South Africans were treated to a showcase of democracy at work.

More than this, committee chair Makhosi Khoza and her team showed us how efficiently parliamentary committees could, and should be run.

Some positive reactions to the selection process, found recently on Twitter:
@Lujastof
This process of appointing Public Protector should apply even when they appoint these MINISTER’S TO PORTFOLIOS. #PUBLICPROTECTOR
@S_Sunane
SA should choose all public figures the way we’re choosing Madonsela’s successor #PublicProtector #PublicProtector
@PatrickManja
Very impressed by the transparency in the process to recruit #Public Protector in South Africa. How I wish many democracies would emulate
@luxster_08
Raise your hand (retweet) if you think presidential & ministerial candidates should go through this. #PPinterviews
@VaFrankT
The interviews were very brilliant and exhaustive. Pity the security reports left more questions than answers #publicprotector

At an early briefing held in June to outline the committee’s work, Khoza said: “The process is going to be very transparent.” The committee has delivered on that undertaking, having pulled a publicly broadcast marathon of interviews of shortlisted candidates lasting over 20 hours on 11 August.

Corruption Watch’s executive director David Lewis, talking to SABC News last week, praised the quality of the selection process, saying it was admirable. “It was a process that was run incredibly fairly and transparently by the chair of the committee, who is an ANC member … I am pleased to believe our campaign played a part in making this an unusually transparent and well informed process.”

Lewis added that this is evidence that civil society can have an effect on parliamentary processes. In terms of South Africa’s Constitution, there is explicit provision for the public access and involvement of citizens in both the national and provincial legislatures. And, says Parliament, the means by which this must happen extends beyond the granting of formal voting rights at periodic elections. Thus, for example, we read in chapter 4, section 59 that:

The National Assembly must:

Certain provisions govern limitations to public access, where “reasonable and justifiable … in an open and democratic society,” – but it is provision (a) that adds a participatory dimension to the South African legislative system. 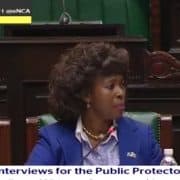 SA should choose all public figures this way Is this our new public protector?