Corruption Watch met with senior officials from the City of Joburg recently to advocate for urgent and stronger action against corruption and bribery in the Johannesburg Metropolitan Police Department (JMPD).

The meeting was a follow up on the April launch of Corruption Watch’s ‘No more tjo-tjo campaign’ and the release of ‘The law for sale’ report.

The drive, which called on motorists to reject bribery on the roads, was underpinned by five recommendations. One of the proposed actions was getting all traffic cops to wear name tags and identify themselves at all times before engaging with motorists.

“It appears the city manager and the JMPD chief have taken our recommendations seriously. A strategy to strengthen and enhance the city’s anti-corruption efforts has been drafted and we were informed that it would be presented to the Mayoral Committee before it is made public,” said Corruption Watch executive director, David Lewis.

The strategy shown to Corruption Watch responds to every recommendation and outlines actions the city will take to respond to corruption and bribery.

Lewis added, however, that it was not enough for the city to just come up with a strategy: “We want to see real change in the way the traffic cops treat motorists. We want to see the cops wearing name tags and identifying themselves as they are required to do by law.”

In the run-up to the meeting Corruption Watch appealed to its fans on Facebook and Twitter for their questions to the city and these were presented during the discussion.

Some of the public’s comments and suggestions were:

Corruption Watch will continue to monitor how the city addresses corruption and bribery involving the JMPD.

It will focus on the administration’s response to the following recommendations:

Excerpt
Corruption Watch recently met with senior City of Joburg officials to discuss an action plan to beat corruption in the metro’s police department. A strategy by the city has been drawn up and shown to us, but real change in the way cops treat motorists is still needed.
File Upload

Joburgers open up about cop corruption 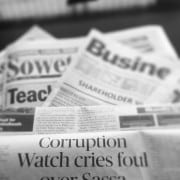 Alex whistleblower gets his job back
Scroll to top