Lifting the lid on media freedom in Southern Africa

Our new two-part series examines some of the ways that governments in Southern Africa attempt to muzzle investigative journalists. In part one, a trio of journalists who have been targeted share their individual experiences with us. Look out for part two, which looks at positive developments around this issue, tomorrow.

They have been charged, tried, imprisoned, and put under surveillance – but these journalists are determined to expose corruption and wrongdoing, though they operate in repressive media environments in Southern Africa.

Rafael Marques de Morais, Tomás Vieira Mário and Tom Nkosi are three brave men with a clear sense of wrong and right. The first two are from Angola and Mozambique respectively, and the third is from Mpumalanga, South Africa. All have been affected, in the course of their work, to varying degrees by a regional media that is not free. They joined a panel discussion in Johannesburg recently, to talk about the state of media freedom in the region.

Southern Africa as a whole does not enjoy high levels of media freedom. South Africa and Mozambique are partly free, according to Freedom House’s press freedom map for 2015. The countries scored 37 and 44 respectively on a scale of 0 (most free) to 100 (least free). A score of 70 shows that Angola’s media, meanwhile, is significantly oppressed.

Namibia, with a score of 33, has the greatest degree of press freedom in the region.

The focus of the discussion at Wits was to highlight some of the ways in which governments silence critical voices, intimidate journalists and limit freedom of expression in these countries. One of the oppressive tactics is the use of criminal defamation.

“Criminal defamation involves the state, as opposed to civil defamation which takes place between two individuals,” said panellist Caroline James, a lawyer at the Southern Africa Litigation Centre. “It involves a criminal trial and you can end up with a criminal record if you’re convicted. Often it does lead to a jail term, and at other times it results in a fine.”

Because the right to freedom of expression is crucial in holding government and public officials to account, withholding it is one method of targeting journalists. However, that right doesn’t only belong to the person making the statement, said James, but also to the people receiving it. Citizens have the right to receive information from journalists and criminal defamation can inhibit that right.

The aim of oppressive media regulations is to create a chilling effect on journalists. If journalists know that they have something good to publish, which has been diligently researched, and they can trust the courts to acquit them in the end, they still have to go through the negative consequences of being arrested, detained and tried and this can be a major deterrent.

Targeted for telling the truth

The three panellists are familiar with just this type of intimidation.

Marques was – and still is – targeted by the Angolan government and military. A practising journalist for 23 years, he has been charged with defamation twice – in 1999, when he was accused of defaming Angolan president José Eduardo dos Santos by calling him a dictator, and in 2011 with the publication of his book Blood Diamonds: Corruption and Torture in Angola. In the book, he accused military officers and private mining companies of torture, murder and other human rights violations – he stood trial and was eventually convicted with a suspended jail sentence.

The government has targeted the internet in Angola, he said. A new draft law submitted to the National Assembly in 2011 gives criminal defamation on the internet a harsher penalty than child pornography – up to 12 years in prison – but the law would not apply to state media and the public sector.

This is one of three major issues around freedom of expression that are currently playing out in Angola – the other two involve the state buying up independent media outlets to gain greater control, and the lack of an independent judiciary that can provide due process. This means journalists who get their facts right can still be convicted because there is no rule of law.

After Marques published his book, he opened a case against the generals, based on the substantial evidence he had collected. “Despite clear evidence, the attorney-general decided that there were no grounds for prosecution and published the entire eight-page report in the state newspapers. The state used those pages to sue me for defamation, but during the trial there was no cross-examination, no hearing of witnesses.”

When justice is a mockery, governments can get away with anything, he said. “The government is clever in … using its resources. With the spike in oil prices there is so much money to bribe and corrupt people.”

Law protects those in power

Tomás Vieira Mário is a vastly experienced communication and media law specialist, and a former chairperson of Mozambique’s national chapter of the Media Institute of Southern Africa. At the moment he’s involved with Sekelekani, an independent centre that focuses on communication for development. 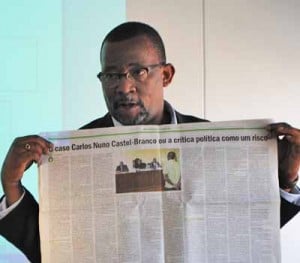 Over the past months Mário has been focused on the case of economics professor Carlos Castel-Branco, who was accused of defaming the former Mozambican president Armando Guebuza in a Facebook open letter in November 2013. Castel-Branco was charged under state security laws and went on trial on 31 August.

“If you write anything that is seen as defaming a high public figure, it is not just criminal defamation but is seen as a crime against state security – it is almost a political case,” said Mário.

In September the court found Castel-Branco and his co-accused, newspaper editor Fernando Mbanze, not guilty of any of the charges, and ruled that criticism is not defamation.

Mário said that although the constitution provides for political participation, people who exercised that right could at the same time be guilty of defamation, in the eyes of the state.

Angola’s penal code protects public figures such as the president, other government officials, or a foreign head of state who visits the country. The law states that if someone has tarnished the name of another by alleging derogatory facts and is unable to provide evidence supporting that claim, they could be jailed or fined. But the law also states that in such a case, proof that the alleged facts are true shall not be admitted.

Mozambique’s main media outlets are state-controlled – independent media are often underfunded and are generally found only in major cities. Although there has been progress, the country’s rating on the Reporters Without Borders press freedom index   has fluctuated since 2002. Gains in one year have been cancelled by losses in the next, and Mozambique’s score dropped from 29.26 in 2014 to 29.98 in 2015, with a fall in ranking from 79 in 2014 to 85 in 2015. It is likely to drop again in 2016, with the recent news that a newspaper editor was gunned down in Maputo in August.

According to the South African Constitution we have press freedom, said Nkosi, but it’s not always upheld.. “I also have a criminal defamation case against me,” he said, adding that small independent publishers such as his company are especially vulnerable and easily targeted. 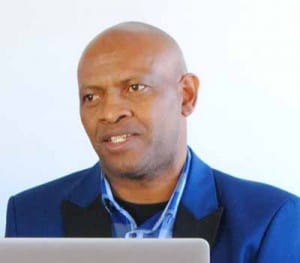 Nkosi worked for the Mpumalanga provincial government for years, serving mainly in a communications role. In 2007 he left the civil service to found Ziwaphi, a community investigative newspaper.

Nkosi spoke of a case, in which he is currently embroiled, which started in 2010. His newspaper published an article describing infighting within a political party. Two party members stole a laptop belonging to a politician and handed it over to police, who were investigating the politician for claiming that an even more senior politician was behind a spate of killings in Mpumalanga. Some of the victims were whistleblowers exposing corruption, Nkosi said.

“We published that story innocently in 2010 – in 2014 we were contacted by people who wanted to go public on the theft of a laptop in 2010. We decided to publish the story provided they signed an affidavit. They did so, and on that basis we approached the even more senior politician’s office for clarification. He denied everything, and soon thereafter the police informed me that a criminal defamation case had been opened against me – with the help of the Freedom of Expression Institute we filed answering papers in February 2015. We are now waiting for a decision.”

The Constitution guarantees press freedom, he said, but criminal defamation is being used to intimidate journalists. “It’s a matter of one hand giving while the other one takes away. Journalists live with the fear that they could be arrested and subjected to a trial, which will likely brand them as common criminals.”

He believes in the abolishment of criminal defamation laws, which he says are a relic from the past. “As journalists our main value point is our integrity – but we should not lose sight of the fact that some of us are being bought for money and favours. Not all of us are innocent, and we end up becoming newsmakers ourselves.” 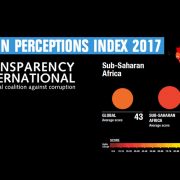 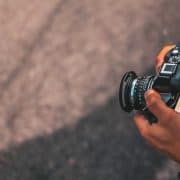