Make your voice heard this Friday!

Have you ever been asked to pay “fifty ya coli” by a traffic officer on the road? Or maybe by a home affairs official who offered to help you jump the queue? What about a security guard who wanted you to “thank” him for allowing you access to what is already a public building?

If that has happened to you or someone you know, then use this opportunity to speak up against it. 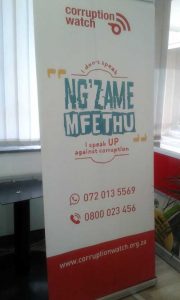 “Ng’zame mfethu” – as seen in this image – is one of the common ways in which bribes are solicited. Image: Corruption Watch

Corruption Watch will have an anti-corruption activation with a twist on Friday 30 September. We’ve come up with some of the most commonly used phrases in the advancement of corrupt transactions: “fifty ya coli”; “brown envelope” and others, and hope to get more from members of the public who will attend. The venue – the Velo tri-circle space in Braamfontein – was chosen for its popularity with young people.

The purpose of the activation is to get a sense of how young people think of corruption in all sectors, to raise more awareness about it and the work that Corruption Watch does. It is also to encourage the youth to take part in the fight against corruption using unconventional, fun ways.

The activation is open to the public and takes place between 11:00 and 12:30 and will consist of a three-panel exhibition stand that has a built in microphone to invite people to come up and, with the aid of a loudhailer, shout out against corruption.

Activators will be drawing crowds to participate by handing out “brown envelopes” which suggest a bribe, but contain information about the lingo used to solicit bribes.  People will be invited to raise their voices – the sound will activate an electronic device on the centre panel which will light up a series of lights.

The aim is to get people to take action, and the person who shouts the loudest will receive a free T-shirt, with one of the activation slogans printed on it.

The Velo circle is in the junction between De Korte, Melle and Juta streets.

For more information on the event contact Patience Mkosana on 072 992 8380 or at patiencem@corruptionwatch.org.za

Anti-corruption and happiness go hand in hand
Scroll to top