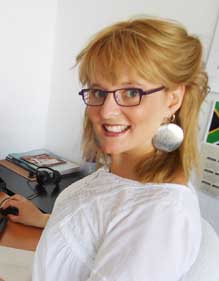 Many young people from around the world gathered in Brazil in November 2012 for the Transparency International (TI) annual anti-corruption conference. One of those was Nicky Rehbock, who was the editor of the Corruption Watch website at the time.

She was so moved by the work of the global organisation – and particularly impressed that its managing director, Cobus de Swardt, was South African born –that she did not hesitate when the opportunity came up last year to join its headquarters in Berlin, Germany on a full-time basis.

Rehbock is a communications officer at TI, and Corruption Watch features her in a series celebrating women who are active in the fight against corruption and those who lead their communities by encouraging active citizenship.

How did you end up working in Berlin, for Transparency International?

I first got to know about the organisation's work when I was chosen to be part of a team of young journalists who blogged for the 15th International Anti-Corruption Conference in Brazil in 2012. It was that experience which made up my mind: I wanted to be part of its work and gain international experience in anti-corruption, with the dream of hopefully – one day – using my skills back in South Africa.

When I returned from Brazil, I continued doing a few blogs for Transparency International and then, in mid-2013, a position became available in its communications department at its secretariat in Berlin. I applied and got the job.

What do you do at TI?

My job title is online communications officer. I help to plan, write, edit and publish online features and blogs about Transparency International's work around the world. I also help to run some of the organisation's social media platforms.

It has been amazing. I've been stretched in directions I never thought possible before, and exposed to exciting ideas, technology and people. Things can get quite pressurised around big events and launches, like Transparency International's annual Corruption Perceptions Index, but I like that kind of buzz; it keeps me on my toes.

What in the position gives you the most fulfilment?

I get the most fulfilment from helping to turn complex ideas and text into something digestible and useful for a range of audiences – and then seeing those audiences respond to those messages via social media. In this way I hope the information we put out there helps empower people, and makes them think and challenge corrupt behaviour in their societies.

Have there been any jaw-dropping corruption stories you have heard from colleagues around the world?

Not so much from colleagues, but from the true stories Transparency International publishes about real people across the world who have fought back against corruption. To me, one of the most horrifying stories was from Zimbabwe, where nurses in a local hospital were charging women US$5 (about R54 – or Z$1 809.50) every time they screamed during childbirth. Women who wouldn't or couldn't pay their delivery fees were then also allegedly detained at the hospital, and charged interest until they paid up.

Let's rewind to this time last year, when you were making plans to relocate to Germany. Would you do it again?

I think I would, yes. My work life has been great from the start, but away from the office the settling-in has been challenging. Adapting to a foreign-language country with a vastly different culture, climate and set of rules has been the hardest. But it's definitely toughened me up.

Going from a team of fewer than 20 people at Corruption Watch to an organisation with a global reach in over 100 countries, do you feel that you are able to make a bigger difference now?

Yes and no. What I loved about working at Corruption Watch was that I felt I had more of a direct connection to the communities and people who were experiencing corruption daily. It made things very real and gritty. Here in Berlin I feel more removed from the grassroots. But that's not necessarily a bad thing as it has enabled me to gain a more holistic understanding of corruption and the ways to fight it, be it in South Africa or elsewhere in the world.

Surely working for an organisation like TI means you have a global perspective on corruption, its trends and the measures governments use to curb it. In that light – and having worked in the anti-corruption field in South Africa – has your perspective of the issue in South Africa changed at all?

Yes definitely. It’s made me realise how hard we as South Africans are on ourselves. When I edit and publish articles about what’s going on in some other countries, it makes me realise it’s not all doom and gloom back home: civil society organisations can operate freely, investigative journalism is thriving and people are reporting their experiences of corruption in the thousands. But of course that’s no reason for complacency.

I just think we as South Africans need to take a step back sometimes and appreciate the gains that have been made. It’s only by acknowledging the good and the bad that we will be able to sustain the fight for a corruption-free future.

Why are you so passionate about working in the anti-corruption space?

In South Africa there is no escaping poverty, human suffering, injustice and inequality. I have always detested all of these and wanted to work in a field that helped address them. But until I started working with Corruption Watch, I always saw corruption as a separate issue. Now, of course, I realise that corruption is often the cause of all those scourges. It is that which makes me so passionate about this kind of work. By fighting corruption, you're fighting all those other detestable things too.

Excerpt
Working for Transparency International has given former Corruption Watch editor Nicky Rehbok a global perspective on corruption – and in some cases, the issue in South Africa seems mild by comparison, she says. That’s no reason for complacency, but we should appreciate the gains we have made.
File Upload