When the People’s Tribunal on Economic Crime in South Africa presented its preliminary findings in early February 2018, it stated that all implicated parties would receive the relevant evidence and copies of submissions and those preliminary findings. They would have three months within which to respond.

Shortly afterwards NGO Open Secrets served 38 implicated parties with an invitation to respond to the evidence presented at the tribunal and which linked them to corrupt activities, by 31 May.

The parties included, among others, the president of South Africa on behalf of the government of South Africa, the African National Congress, the French and Belgian governments, French arms giant Thales, and South African state owned arms company Denel. Banks served include Belgium’s Kredietbank and the Luxembourg based KBL.

The May deadline came and went, and responses were few and far between – just two, in fact, from the National Prosecuting Authority (NPA) and the KBC Group, on behalf of its former subsidiary KBL Bank – which was sold in 2011 to Precision Capital, an investment vehicle owned by the Qatar royal family.

Thomas Leysen, chairperson of the KBC Group, stated in a letter that that the group would not be able to verify the facts of the allegations against KBL Bank as it no longer has access to any of KBL’s archives or documents. Furthermore, the events “took place a long time ago” and according to archiving policy, the company is only required to hold records for 10 years after any relationship is terminated.

However, said Leysen, should the allegations against Kredietbank and its Luxembourg relation “prove to be true, it would be deeply regretted by KBC today.”

The NPA, meanwhile, asked that relevant documents, which it said it had not received, be sent and that it be kept apprised of developments, but as far as the arms deal was concerned it would wait for the tribunal’s final report as well as the outcome of the judicial review into the Seriti Commission’s findings. In terms of state capture, it noted that evidence in this matter had been sent to the national police commissioner. It also reminded the tribunal that a commission of inquiry was under way.

During the initial hearings held between 3 and 7 February 2018, around 15 whistle-blowers and witnesses made presentations relating to apartheid-era sanctions busting, alleged corruption in the 1999 arms deal and state capture related to Denel. That evidence convincingly fulfilled one of the aims of the tribunal, which was to join the dots between economic crime in South Africa from the past until the present.

With just a handful of responses to the invitation, the panel will now proceed with drawing u its final report, which the implicated parties had their chance to contribute to. The responses as well as the non-responses will be included. This final report will not be legally binding, but will contain recommendations that will be handed over to the relevant authorities for further investigation.

Recap of the main findings

“There is in our view enough evidence to warrant at least a thorough investigation into the conduct of a number of entities including the French government and the Kredietbank. They co-operated with the apartheid system, ensuring the unlawful flow of arms and ammunition and facilitating payment through a labyrinth of devious structures and routes.”

“These purchases were made in order to facilitate money making for corrupt people, including politicians. This, in our view was the real purpose of the decision. The purpose was illegitimate. The decision to enter into the Arms Deal therefore must have been irrational.  There is also, in our view, enough evidence to raise the strong suspicion that cabinet ministers and others in the state machinery were involved in these operations and gained considerably for themselves.”

“We have had access to persuasive circumstantial evidence that Denel and a number of associated companies were manipulated so that, as state owned enterprises, they did not perform their functions solely for the public benefit – as should have been the case. We recommend a full investigation by relevant authorities.”

“We would also emphasise that state capture is to some extent also a result of the corrupt activities that had gone before it. Absent the violation of United Nations sanctions, and the corrupt Arms Procurement Package, the kind of state capture described in the evidence would probably not have occurred. The examples of state capture mentioned here are the tip of the ice-berg.” 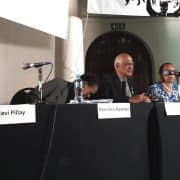 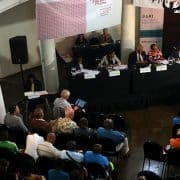