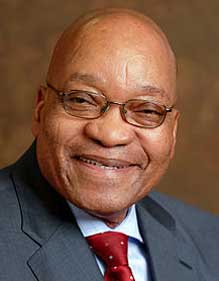 Last week Corruption Watch reported on allegations made by a former senior investigator for the commission of inquiry into the procurement of arms, commonly referred to as the Seriti commission. Norman Moabi's damning claims were of a second agenda that is at play within the commission, which was appointed by President Jacob Zuma in 2011.

Hennie van Vuuren, co-author of The Devil in the Detail and fellow at the Open Society Foundation of South Africa, was of the view that the allegations are serious, and therefore warrant an in-depth look by Zuma, if the credibility of the commission – which has been questioned – is to be fully restored. On Tuesday the head of the commission, Coonstitutional Court Judge Willie Seriti, responded to the claims by Moabi in the media statement below:

Mr Norman Moabi, an Attorney who has been in the employ of this Commission has, in his letter of his resignation signed 7th January 2013, levelled serious allegations against the Commission. The gist of the allegations, or his perception, as he puts it, is that the Commission has a second or secret agenda which is not compatible with its mandate to establish the truth of what transpired in the Arms Procurement Process, as spelt out in the Commissions Terms of Reference.

The letter has found its way into the various media houses, triggering a public uproar and demands that the Commission should provide a full explanation. I note that we are dealing here with perceptions but recognise that widely publicised perceptions, if left unchallenged may soon crystallise into facts in the mind of the public. I have accordingly deemed it necessary to respond in full as I hereby do.

Since the contents of the letter are in the public domain I feel free to quote there from. The following concluding passage captures the essence of the letter:

"I am unable to be part of this Commission since I have satisfied myself that the Chairperson seemed to have other ideas and modus operandi to achieve with the Commission what is not the clear mandate of the enabling government gazette".

This statement, read with other sentences in the letter, reveals that the target of criticism is primarily the Chairperson, even though the whole Commission is tarnished.

In support of the claim of a second agenda Mr Moabi relies on a number of assertions contained, firstly, in paragraphs 1, 2 and 3 of the letter and, secondly, in the two quotations appearing under the heading "The penny has dropped".

I deal first with the first part. It is necessary to first outline briefly the manner in which the Commission has been carrying its work up to the end of 2012, the modus operandi, to use Mr Moabi's language. This will hopefully put into perspective the perceptions contained in the first part of the letter.

1. The Commission has in at least two media statements explained the phases/stages through which its work was being carried out. Most of the work done so far was in the second phase, This entailed perusing and analysing the massive documents we received from various bodies and entities that were involved in the arms acquisition process, including the State Agencies that investigated acquisition process, for example, the disbanded Directorate of Special Operations (DSO, commonly known as the Scorpions) and the Directorate for Priority Crime investigation.

All the documents had to be studied in order to sift therefrom information that may assist the Commission in its investigations. In order to streamline the reading and sifting process, the internal legal team comprising legal practitioners and legal researchers, was divided into three sub- teams and each sub-team was allocated a specific area of the terms of reference or a specific programme to focus on for example, the acquisition of the Advanced Light Fighter Aircraft or the Rationale and Offsets.

Each sub-team would make summaries of the information extracted from the documents which is relevant to the specific programme. Copies of summaries made by each team would then be made available to the Chairperson and the two other Commissioners as well as being distributed amongst the sub-teams, so that each sub-team would have copies of the summaries made by the other sub-teams. In addition, we have a Document Manager who keeps copies of all the documents received and generated by the Commission as well as a register thereof. These documents kept by the document manager are accessible to all the legal professional staff.

It is from the summaries made as above that the briefs to the evidence leaders were compiled. It is apposite here to refer to a meeting held on 6 November 2012 in the Commission's offices. It was attended by all the Commissioners, all the members of the internal legal team (including Mr Moabi) the Secretary to the Commission as well as the Commission's Spokesperson. This was essentially a planning session in preparation for the public hearings. It is in this meeting that a document was distributed containing the following:

·         list of witnesses to be called for the first phase of the public hearings.

·         the witnesses were divided into groups A, B and C based on the nature of the evidence they were expected to give,

The bundle prepared for the meeting included a document entitled Preliminary Strategy which was also circulated and discussed at the meeting. The following emerges inter alia from this document:

·         the names of the legal practitioners assigned to assist in the public hearings, which included Mr Moabi.

·         Advocate Mdumbe is designated to liaise with the evidence leaders for purposes of briefing them and responding to their enquiries and requests for information. It was necessary that only one person be allocated this role for purpose of control and to avoid duplication. Advocate Mdumbe has been designated Head of Legal Research and has been with the Commission since it commenced its work in earnest in April 2012. He has built an extensive knowledge of the contents of the many documents in the Commissions possession and was best placed to provide the information required by the evidence leaders expeditiously.

If there was any secret agenda surely this document would have revealed it. I am positive that no such agenda appears in any of the Commission's documents nor will Mr Moabi produce any.

2 Against the above background I now deal briefly with the specific assertions made in the letter under consideration.

2.2 When Mr Moabi talks about clandestine preparation of documents and/ briefs, he is probably referring to the role played by the Head of Research in preparing briefs for the evidence leaders. Similarly reference to the unknown person who dictates what information should go into the briefs is again reference to the role played by Adv Mdumbe. I suspect that Mr Moabi resented the role played by Adv Mdumbe probably because he considers himself a more experienced practitioner who should have been given that role. He clearly knows to whom he is referring but he chooses to mislead by referring to an unknown person or persons.

2.5. The allegation that the input of people who do not subscribe to the non-existent secret agenda is excluded and that such peopie are deliberately distracted with irrelevant material is without basis and is patently false.

I think that Mr Moabi is making these false allegations to deliberately tarnish the image and credibility of the Commission probably because of a personal grudge he harbours against me based on reasons he has not disclosed.

I note that if he had genuine concerns about the modus operandi of the Commission he should have raised these internally with either the Secretary or myself and sought clarification. Instead he raises these very serious allegations for the first time in a letter of resignation.

"The penny has dropped"

I note that Mr Moabi quotes two statements that he suggests confirm the existence of a secret agenda. He does not, however, say who made the statements and i do not know if the statements are an accurate reflection of what was actually said.

Media reports indicate that the utterances are attributed to me and I assume this to be the case. I do not, however, recall making such utterances nor do I have any idea of the occasion during which the utterances were made and the context in which they were made.

I have perused the minutes of the meetings of the internal professional staff in an attempt to verify the position, I have found no such utterances The minutes of the 6th November 2012 referred to above do, however, contain references to hearsay evidence in the context that some of the submissions and/or allegations that have been in the public domain are based On hearsay evidence and I emphasised that we still needed to conduct more targeted investigations in order to see if the allegations have substance.

I should mention also that Mr Terry Crawford Browne in particular has during the course of 2012 inundated this Commission with emails questioning how the Commission was conducting its business and he has run a number of press articles along similar vein. I may have expressed the sentiment that he may stop the negative comments once he has given his evidence.

The bottom line is that even if I may have uttered words similar to those quoted this in itself would not show the existence of any second agenda. I draw attention to the following factors which strongly militate against the existence of a secret agenda:

1. I am a Senior Judge and am fully conscious of the oath of office that I took. I am assisted by two other senior Judges whose integrity is beyond reproach. All of us know that the success of this Commission depends on our credibility and it is inconceivable that we would depart from the clear mandate given us by the President and instead pursue an unknown agenda

2. The information thus far gathered by the Commission and which will be the subject of the upcoming first phase of the public hearings was extracted from documents that were received from various sources referred to above as well as submissions received from some of the witnesses. The sources know about the information and the Commission will be totally discredited if any of it were to be concealed or in any way manipulated,

3. I have already engaged private Independent specialist investigators to probe aspects of the terms of reference in respect of which our internal legal team do not have the requisite expertise and it is inconceivable that their reports would be manipulated to serve a hidden agenda

4. I have engaged private independent legal practitioners amongst whom are Senior Counsel (SC) to lead the witnesses at the public hearings. They will be in full control of leading evidence as well as interacting with the witnesses prior to the hearings.

The Commission has always interacted with them in an open, transparent manner and they have no reason to doubt my bona fides instead they have expressed full confidence in me and my fellow Commissioners. I refer to the media statement that they have issued.

Issued by the Commission of Inquiry into allegations of fraud, corruption, impropriety or irregularity in the Strategic Defence Procurement Packages, January 22 2013

Excerpt
Judge Willie Seriti, who heads the commission of inquiry into alleged corruption in the arms deal, has responded to allegations of a ‘second agenda’ levelled against the commission by a former senior investigator.
File Upload

How things work at Corruption Watch

Vavi: show me proof and I’ll step down