The week that was: global view 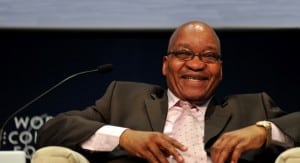 South Africa experienced a fascinating week, politically speaking, last week. As can be expected, the world was watching and some of the leading global news agencies reported on the events of the past few days, including “Guptagate” and the confirmation by Fifa -and later denial by South Africa – of a 2010 World Cup bribe. The following are some of the articles published on these and other topics:

Corruption allegations linking President Jacob Zuma to one of South Africa’s prominent business families are evolving into an unprecedented crisis inside the ruling African National Congress over how to maintain its political control in the post-apartheid era. – Wall Street Journal

President Jacob Zuma on Thursday rejected allegations that he is influenced by a wealthy business family, declaring under sharp criticism from opposition lawmakers that he is in charge of the appointment of Cabinet ministers in South Africa. – Washington Post

When South Africa’s ruling party no longer wanted Thabo Mbeki to be head of state after allegations he had abused his power, the former president had the “decency” to exit gracefully, senior ANC sources say. But no one expects Jacob Zuma to do the same. – The Guardian

South African President Jacob Zuma is facing allegations that he allowed a powerful family to engineer the hiring and firing of Cabinet ministers. Members of his own ruling party, the African National Congress, have come forward in recent days claiming that members of the Gupta family offered them top government positions on the condition that they act to advance its commercial interests. – LA Times

South Africa’s ruling party has reaffirmed its confidence in President Jacob Zuma, after a growing chorus of corruption allegations against the leader. – Belfast Telegraph

According to Fifa, South Africa payed a $10-million bribe to secure hosting rights for the 2010 Soccer World Cup

President Jacob Zuma on Thursday rejected allegations that he is influenced by a wealthy business family, declaring under sharp criticism from opposition lawmakers that he is in charge of the appointment of Cabinet ministers in South Africa. – US News and World Report

The African National Congress party on Sunday closed ranks behind President Jacob Zuma and condemned a wealthy business family whose alleged abuse of access to him has led to the biggest scandal of the leader’s career. – Wall Street Journal

Zero leaves community with no water