We have to make the water sector an island of integrity

By the end of the 2018/2019 financial year the Department of Water and Sanitation (DWS) had a staggering R16.5-billion in irregular expenditure and was, in the words of the chair of parliament’s standing committee on public accounts, insolvent.

On 13 May the minister of human settlements, water and sanitation, Lindiwe Sisulu, held a media conference to report on actions she has taken to deal with the rampant corruption and mismanagement that resulted in this situation. Although the events that created this situation predated Minister Sisulu’s tenure, she has the challenge of cleaning up the mess.

At the media conference, we handed the minister a report: Money down the Drain: corruption in the South African water sector. The report was commissioned by the international Water Integrity Network and South Africa’s Corruption Watch. Much of the information on which its analysis is based came from excellent investigative work by the Auditor-General and the media — South Africa can be grateful that these still do their work pretty well.

The report details corruption and gross mismanagement not only in the DWS, but across the whole sector, including local government. The result is dry taps, dirty water, delayed projects and job creation, and massive escalation of project costs.

Based on our analysis, we made some simple but potentially far-reaching recommendations. In summary, they are to make the water sector an “island of integrity”. To achieve this, the first step is to recruit and support ethical and competent people to lead the sector; then to ensure that procurement processes, through which much of water budgets are spent, are kept honest and that political influence is kept out; and finally, a culture of consequences must be instilled so that malfeasance is discouraged and, where it occurs, is rooted out.

At the media conference, the DWS director-general reported that 11 senior managers and 86 lower level staff have been charged and found guilty; 21 cases have been opened with the police; and 13 forensic and 151 irregular expenditure cases are still under investigation.

This is not enough.

No detail has been provided about the offences for which people were found guilty. It was stated that almost R18.2-million might be recovered through this process, but this is just a tiny fraction of the R16.5-billion classified as “irregular expenditure”.

It is a matter of public record that over R6-billion was spent fruitlessly on just two items: the “War on Leaks” programme and the Giyani “emergency projects”.

Both were characterised by questionable and probably illegal decisions. But the public does not know whether these issues were included in the reported investigations and what consequences there have been. Since 2012, the Special Investigating Unit has been tasked with a number of water-related investigations, but we don’t know the outcomes.

Our report also provides extensive evidence that the appointment of directors and senior staff in sector institutions and the department facilitated corruption and mismanagement. This dimension of the problem has yet to be acknowledged and reflected in a reform of appointment and recruitment processes. It is vital to end the vicious cycle of unsuitable appointments.

The department, with many of its senior officials still suspended or in acting positions, is in need of a serious overhaul.

Finally, procurement of goods and services must support the implementation of coherent programmes. Our report outlined the many strategies that corrupt individuals use to bypass basic procurement rules — proclaiming an emergency, alleging that there is only one supplier for essential services, or fraudulently rigging tender adjudication processes. Ethical leadership is needed to uproot these processes.

To address these issues, the governance of the sector must be improved. In particular, independent oversight is needed of key regulatory decisions such as the issuing of formal directives as well as senior appointments. It was telling that the CEO of one water board could tell a parliamentary committee that he would have lost his job if he didn’t implement an illegal instruction. An amendment to the Water Services Act is urgently needed to clarify the rights and obligations of the minister and water boards in relation to the vexed issue of directives.

The crying need to make the water sector an island of integrity has been laid bare by the Covid-19 crisis.

South Africa’s shocking inequalities have been revealed by the number of people without access to reliable and safe water. Vulnerable communities have been made even more so by their need to find water to wash their hands. It is evident that, in many cases, this resource is denied to people because of greed, incompetence or the desire to fund political ambitions.

The first step must be to create ethical leadership in the sector. The minister has already begun to instil a culture of consequences. She now has the opportunity to ensure that all appointments, whether of senior officials in the DWS, or members of boards of water entities, are of people with unimpeachable track records. This step is critical in breaking the cycle of systemic corruption.

But she will need support to turn things around. Globally, civil society has played a critical role in pushing for action against corruption. In South Africa the health sector has established an anti-corruption forum that brings together government agencies, civil society and the private sector to tackle corruption. This model could well be adopted by the water sector.

Muller is a visiting professor at the Wits School of Governance. Schreiner is executive director of the Water Integrity Network. Both were senior officials in the Department of Water Affairs and are currently members of the minister’s advisory committee of water specialists 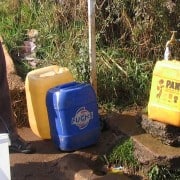 A report on corruption in the water sector to be released

Covid-19 and corruption – two risks, one opportunity
Scroll to top