After five days of compelling and disturbing testimony, presentations, submissions and personal accounts, the People’s Tribunal on Economic Crime wrapped up on Wednesday evening. The five-member panel of adjudicators shared their preliminary findings, followed by the opening of The People Against Corruption exhibition.

The evidence presented was just the tip of the iceberg, said the panel, represented by chairperson Justice Zak Yacoob. He lashed out at the long-standing general failure to hold perpetrators of economic crime to account, saying that the corrupt arms deal would not have been possible if apartheid-era sanctions busting and corruption had been thoroughly investigated and followed through with legal action.

“The purpose of the arms deal was to facilitate money for corrupt political people,” he said. “There needs to be a rigorous investigation as soon as possible.”

Yacoob relayed the panel’s recommendation that a copy of the final report be handed over to the national director of public prosecutions, the commissioner of police, and the minister of justice, and that investigations be pursued as a matter of urgency.

The panel has allowed a three-month window in which implicated parties may respond to evidence presented. Such responses will be taken into consideration when deciding on the date of the final report.

Although the tribunal has no legal standing, it is hoped that evidence presented, if handed over to authorities, will result in investigations, prosecutions and justice. “There is sufficient information that has come forth in this tribunal that should allow for prosecution authorities to prosecute and certainly investigate,” said Corruption Watch’s attorney Basetsana Molebatsi, who presented the organisation’s submission to the tribunal.

The tribunal was organised by civil society groups including Corruption Watch, Open Secrets, Right2Know Campaign, the Centre for Applied Legal Studies, the Foundation for Human Rights, and the Public Affairs Research Institute.

“Monday’s testimony stands out in people’s minds, “said Open Secrets researcher Neroli Price in an interview on Wednesday morning. She was referring to the ‘explosive’ revelations of arms deal insider Ajay Sooklal, who on Monday fingered high-level government individuals in South Africa and France in covering up corruption related to the multi-billion-rand procurement of military equipment.

“But we also heard evidence on apartheid-era economic crime, because we can’t forget that all this comes in a context … there’s a continuity …” Price added. “These eras all link together … we have to deal with the structural issues of economic crime and how they affect our country.”

The event took place over five days precisely for this reason, she said – to establish the context and join the dots of corruption between the apartheid era, the arms deal era, and the current environment of state capture.

The People’s Tribunal was a significant civil society initiative for the health of our constitutional democracy, said Bishop Malusi Mpumlwana, general secretary of the South African Council of Churches, in a video address on the last day. He described the country as ‘punch drunk’, reeling at the rapidity with which corruption is being uncovered in the public and private sectors. As a result South Africans have “become quite alive to the reality of power, business, politics and the pillaging facilitated by the abuse of the baton of authority … at the expense of the impoverished citizenry.”

It is in this context, Mpumlwana said, that we recognise just what such a tribunal signifies: it’s a defence of lives, in defence of institutions of public values and public morality.

It is an example, he said, of how we should act in other social and economic spheres of our democratic dispensation.

“There will be no turning back.” 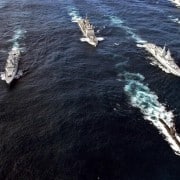