After speaking to JMPD spokesperson Wayne Minnaar and analysing our own data from the tip-offs we get from the public, it’s become clear that Sandton is a bribe hotspot, followed closely by Fourways, Dainfern and Midrand. Assess the level of metro cop bribery in your area with our nifty Google Map!

You can also read up on the exact locations as reported to us by the public, here.

Referring to trends coming out of the JMPD hotline, Minnaar said: “We have noticed that in the more affluent areas such as Sandton, the amount of money exchanged is higher than in other areas. Although there was corruption reported in almost all of the metro’s regions, more money was given or received in Sandton.”

The “regions” to which Minnaar refers are the seven traffic enforcement and crime prevention areas in Johannesburg metro. (See table and map at the end of this article)

Likewise, reports we’ve received from the public involving the JMPD also indicate that Sandton is a bribe haven, particularly along Rivonia Road, William Nicol Drive and Grayston Drive. In tallying up the volumes, Corruption Watch has recorded the highest number of complaints from region E (Alexandra, Wynberg and Sandton), with region A (Diepsloot, Kya Sand, Bloubosrand, Cedar Lakes, Fourways Gardens, Dainfern, Midrand) being the second most reported-on region.

This is what the public have told us:

“I was stopped at a metro police road block (Marlboro). It was identified that my Licence had expired. When told the fine was R1000 I started complaining. I was then asked how much I could pay. I said R100. I was then asked where the cash was? I said sorry I don't have cash. He then let me go”

“I was pulled over by one of two metro police on Sunday 12 May on the corner of Sandton Drive and Grayston at 10:20am. I was kept there for almost 10 minutes while my licence and tax disc (both valid and up to date) were examined, and was asked to produce an emergency red triangle, which I could not find in my boot. Then was threatened with a fine, then he suggested i pay a spot fine (bribe) which I refused. I asked for an official paper fine, and then he said i can go! There is often a road block in this location.”

According to the public’s complaints about the JMPD, which came through to Corruption Watch between January 2012 and April 2013, we understand that:

• Bribes are solicited from drivers whether they have contravened the law or not;

• If a person refuses to pay a bribe, the officer usually lowers the amount requested;

• If the driver still resists paying a bribe he or she is (a) given a fine, if the law has been broken; (b) allowed to leave without paying the bribe; (c) given a fine in which the officer has fabricated allegations;

• When drivers say they do not have any cash on them, they are asked to go to the nearest ATM and withdraw the money.

While Corruption Watch welcomes the improvements as shown by our and the JMPD’s statistics, we remain vigilant against bribery and corruption on the city’s roads. Now more than ever we need the city’s commuters to be our eyes and ears on the ground, and continue reporting cases of JMPD corruption to us, so we can continue holding authorities accountable. 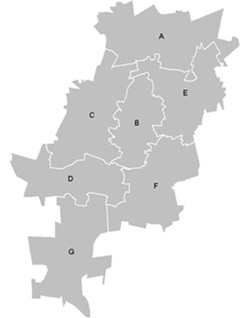 Excerpt
After speaking to JMPD spokesperson Wayne Minnaar and analysing our own data from the tip-offs we get from the public, it’s become clear that Sandton is a bribe hotspot, followed closely by Fourways, Dainfern and Midrand. Assess the level of metro cop bribery in your area with our nifty Google Map!
File Upload