Not perfect, but commission can still produce results 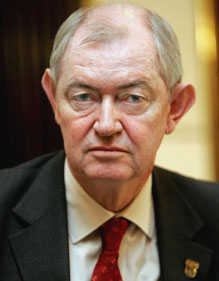 His appearance was greeted with fanfare and excitement after months of dry and technical testimony by largely-unknown flunkies and officials. But then, former trade and industry minister Alec Erwin came and went in the blink of an eye – and fears for the credibility of the Arms Procurement Commission went into overdrive.

“Arms Deal Inquiry hits a wall,” screamed The Times while The Star declared that the cross-examination of Erwin had been “lost in battle”. The Mail & Guardian stridently called for the commission to be cancelled because it was an “exercise in futility and waste” and a “further waste of taxpayer’s money”.

The failure to cross-examine the former cabinet minister seemed to give credence to growing fears that the Seriti Commission will be a whitewash and accomplish nothing.

“I think the way they dealt with Alec Erwin is the first sign,” said arms deal whistle blower Richard Young. “I think this commission is a multiple kick for touch, in a rugby analogy. Nothing fills me with confidence that [commissioners and evidence leaders] have the slightest clue what’s going on … The truth will come out but not through the commission.”

Erwin, one of the cabinet ministers on the inter-ministerial committee which approved the arms deal, was expected to be grilled on the offsets – contracts obliging foreign companies to provide investments and jobs in return for buying their arms – which the government had promised would lead to 65 000 jobs and R110-billion in local investment, and which were its justification for the deal. These had failed miserably, yielding only 13 690 jobs and R6-billion in foreign investment.

Instead of being grilled, Erwin spent less than one day on the witness stand and was not cross-examined after Lawyers for Human Rights – representing arms deal campaigners Paul Holden, Hennie van Vuuren and Andrew Feinstein – failed in their attempts to have contracts referred to in Erwin’s witness statement, declassified.

Despite this setback, David Cote of Lawyers for Human Rights denied the situation was as dire as its detractors made out.
He did concede however that the commission has some shortcomings, such as access to documents, which have not all been declassified.

Another big problem was the fact that witness statements are only made available on the morning that the witness testifies, leaving no time to prepare for cross-examination. “There’s an art to cross-examination,” Cote pointed out. “It’s not just asking questions. You have to test the evidence.”

Cote said it also appeared that witnesses were not all treated the same – “Alec Erwin has a 96-page affidavit and he went through it in the morning, how is that possible?” – while critics of the deal, like his clients, had to jump through hoops to get documents they requested, if they ever did.

This is a claim borne out by Young and arms deal activist Terry Crawford-Browne, both of whom are still awaiting documents they requested months ago. “The commission hasn’t given me any of the documents I’ve asked for … I think they are trying to make it difficult for me to cross-examine,” said Young in late February.

But while Young and Crawford-Browne are fast losing faith in the proceedings underway in Pretoria, Van Vuuren and Holden are not. Imperfect though it might be, they say, it is the best avenue for getting to the truth.

Van Vuuren said “walking away” was the easy option. He said South Africans – as individuals and through civil society groups – should be demanding that the commission do its job instead of calling for it to be cancelled, as Young and Crawford-Browne did.
“It’s this giving up and walking away that lets powerful people get away with it.”

Van Vuuren pointed out that one example of progress was the arms deal affordability report that was declassified after a request from Lawyers for Human Rights. The report is an examination of the deal’s economic impact and was presented in 1999 to the arms deal sub-committee. It indicated the impact on the South African economy would be broadly negative in the best-case scenario and devastating in the worst case.

“The document was kept secret for 15 years. Now it’s in the public domain mainly due to our persistence,” he said.
Holden agreed the declassification of the affordability report was a “major win” and said citizens and civil society must insist that the commission did its job instead of simply throwing in the towel.

“At the beginning of the commission I said I was cautiously optimistic. Right now I’m cynical, but I’m not going to stop engaging,” he said. “It would be far more useful if more civil society engaged with the commission so we can achieve some form of accountability.

“People should go and watch the commission, and write letters to newspapers. NGOs should explain to people what’s going on, and interrogate how the commission is fulfilling its mandate behind the scenes. The power of public pressure can be seen in the declassification of the affordability report.”

Excerpt
There are some who feel that the Seriti Commission, currently probing allegations of corruption in the arms deal, is a lame duck – but others feel that it is the only way to the truth, and may yet produce results if citizens and civil society become more involved.
File Upload The arms deal – analysis and updates