South Africa ranks as one of the most worried nations in the world, according to a new international survey.

And unlike many other countries, Covid-19 is not the top concern locally, with citizens more concerned about corruption and unemployment than they are about the pandemic. Some 78% of South Africans believe that the country is “on the wrong track”, compared to the international average of 62%.

South Africa’s grim outlook is ranked the second to worst out of a total 27 countries recently surveyed by global researchers, Ipsos. Only respondents in Peru were more pessimistic.

The latest What Worries the World survey assesses global fears and anxieties. Over 22 000 participants responded to the survey conducted at the end of 2020.

The survey deals extensively with the Covid-19 pandemic which wrought havoc in 2020 and still presents a major sense of uncertainty in the new year. This is especially true for developing nations, like South Africa, which have yet to acquire vaccines.

Globally, Covid-19 remains the primary concern, with half of all respondents indicating that the virus and associated human costs remain their countries’ biggest worry.  Unemployment, poverty, corruption, and healthcare complete the list of the top five global concerns. South Africa, in addition to ranking as the second-most pessimistic nation in the world, also bucks the global trends in priority of concerns.

A total of 46% of South African respondents listed Covid-19 as their main worry, less than the global average. 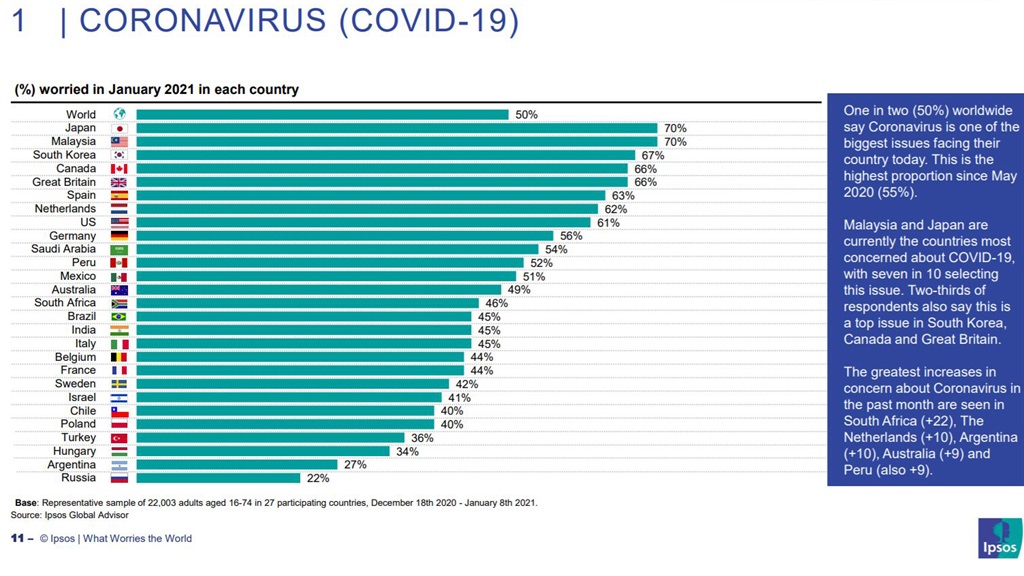 European citizens, particularly those in Sweden, Germany, France, and the UK, are unperturbed by the prospect of political corruption in their countries – but are concerned about Covid-19 instead. South Africa’s lockdown has had a devastating impact on the country’s already-beleaguered economy. The pandemic and prolonged lockdown measures resulted in job losses and the unemployment rate rising to above 30%.

In addition, the pandemic also brought even more corruption, with high-ranking government officials implicated in collusion and bribery in the procurement of Personal Protective Equipment (PPE).

Police reform in South Africa is long overdue
CW warns of opacity in emergency procurement measures
Busting the curfew to get home
Drugs an extra element of danger in Covid-19 pandemic
The calm before the storm?

Submit a report of any corrupt activity you are aware of to Corruption Watch! Corruption Watch analyses all reported incidents very thoroughly - all we need is your help!

Or send us a WhatsApp message on:

Zuma to plead ‘not guilty’ when corruption trial resumes on 26 May Opacity in Covid vaccine trials, sales contracts could scupper global respo...
LET'S STAY IN TOUCH