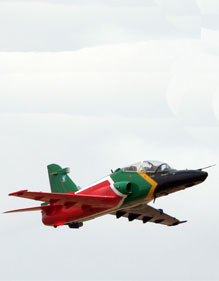 For it was the government’s multi-billion rand purchase of fighter jets, submarines, corvettes, helicopters and tanks in 1999, and some subsequent moves to stymie investigations into the deal, that analysts believe set Africa’s then-newest democracy on the path of corruption and impunity.

From the outset, the deal was mired in allegations of corruption and bribery on the part of Cabinet ministers, high-ranking government officials, lobbyists and politically-connected businessmen.

“The arms deal created a culture of corruption,” says political analyst William Mervyn Gumede. “If you get this kind of impunity, you can’t expect ordinary citizens and other political leaders to adhere to the rule of law.”

For Andrew Feinstein, a former ANC MP who was removed from Scopa, Parliament’s public accounts committee, following attempts to investigate the deal, the crumbling of the ANC government’s moral standing was the biggest casualty.

“The biggest impact of the deal has been to create an environment where personal and political party enrichment through corruption is seen as being sanctioned by the most senior of the country’s leaders,” he says. “It also undermined our institutions of democracy, from Parliament, through our investigative and prosecutorial bodies, to the courts.”

Which is why Feinstein, Gumede and Anglican archbishop Njongonkulu Ndungane, who chairs Corruption Watch’s board, have welcomed the Seriti Commission of Inquiry into allegations of fraud, corruption, impropriety or irregularity in the arms deal. It’s currently underway in Pretoria.

The commission was convened by President Jacob Zuma in October 2011 and sat for the first time on 5 August 2013 – 15 years after Ndungane had first called for it.

Back in 1998, South Africa – only four years into democracy – had passed the defence white paper that saw no conceivable foreign military threat to the country and agreed that poverty eradication was the government’s prime priority. Civil society was lobbying hard for every available cent to be spent on education, health, housing, job creation and crime prevention.

But then the government announced it was to purchase close on R30-billion worth of arms to modernise the defence force. In return, the government claimed, 65 000 jobs would be created and R110-billion in offsets (investments in industry) generated. In short, it was a win-win for South Africans, many of whom bought the argument.

But Ndungane, head of the Anglican Church at the time, recalls that he was “astounded” by the figures touted. “The Anglican Church is not a pacifist church and we acknowledge the right of the State to protect its borders and citizens, but we objected to the fact that we went for a Rolls Royce (arms package) when a sedan could do.”

He also remembers not being swayed by the offset argument.

“It cast a suspicion in our minds,” he says. “The sad thing is that my office had an open door policy and I recall a delegation from the intelligence operations led by Bheki Jacobs coming to see me, who said this arms deal was the tip of the iceberg of corruption deals in the pipeline.”

Concerned, Ndungane approached President Thabo Mbeki in 1999 to warn him about developments “that we need to get to the bottom of with a commission of inquiry headed by a judge … to nip in the bud any future deals”.

Mbeki spurned Ndungane, a move he believes exacerbated the crisis. “If the head of state had acted at the time, the arms deal would not be the kind of monkey on our back that it has become.”

“We need the truth to come out,” says Ndungane of the Seriti Commission. “We can cancel the deal and begin to recoup some of that money to meet the urgent development needs of our people.

“The arms deal is the root cause of the lack of accountability in the country. If we can’t deal decisively with corruption, we can’t move forward.”

This is a sentiment echoed by Gumede and Feinstein – who are especially concerned about problems that have dogged the commission, including claims that its integrity might be compromised. Most recently, arms deal critic Terry Crawford-Browne sought recourse in the Constitutional Court, asking it, among other things, to terminate the commission, calling it a “farce”.

Gumede too is concerned about the commission but says: “It’s better to fight even if we don’t get anywhere. If we make a noise, we may be able to change things.”

David Lewis, the executive director of Corruption Watch, agrees with Gumede that the commission is important despite its problems.

"It may be our last chance to get to the bottom of the whole sordid affair. And it's not going well. Indeed having discredited Scopa and parliament, having undermined the auditor-general and other key public institutions, the arms deal may well be about to sink its teeth into judicial commissions of enquiry and the institution of the judiciary itself,” he says.

“South Africans who care about their country should be vigilant to ensure that the Seriti Commission does not even appear to be a whitewash. If it does, it will deal all South Africans a powerful blow.”

Lewis adds that although the country will move on, it will have “learned the hard way that where large amounts of public resources are at stake, the predators and carrion will gather, and that the only real safeguard lies in an active and vigilant citizenry.”

Excerpt
The arms deal saga has been going on for 15 years and still no clarity has been reached on the matter, nor have those involved been held accountable. But South Africans hope that the Seriti Commission of inquiry into the procurement scandal will get to the bottom of the deal that paved the way for corruption to infiltrate the government.
File Upload