Zuma doesn’t have to pay back the money President Zuma has been exonerated by Police Minister Nathi Nhleko, who briefed the media on his Nkandla report. Image source: GCIS

Police Minister Nathi Nhleko yesterday gave his report-back on the Nkandla upgrades. At a press briefing punctuated by educational videos on the use and meaning of various features at Nkandla, Nhleko revealed his conclusion: President Jacob Zuma does not have to pay back any of the money.

Nhleko’s report stems from a recommendation by the public protector Thuli Madonsela, that Zuma should repay a portion of the upgrades to his private residence at Nkandla, which came to approximately R250-million in taxpayers’ money.

In her 2014 report titled Secure in Comfort, Madonsela pointed out questionable features like the swimming pool, new kraal, visitors centre and amphitheatre, which were said to be security features.

“The security upgrades have dominated public discourse since 2011, and they gained momentum after complaints were lodged with the public protector,” said Nhleko.

He was instructed by Zuma in mid-2014, while Zuma was responding in the National Assembly to Madonsela’s report, to brief Cabinet on whether the president is in fact liable for any contribution.

David Lewis, executive director of Corruption Watch said in a statement: “We are dismayed, but not surprised by the report and its conclusions. The report was commissioned by the president, the very person implicated in the scandal, from someone who owes his position to the self-same president.”

The report has no credibility, said Lewis, and will bring no closure to the sordid Nkandla saga.

Taking all sources into consideration

The report presented yesterday was, by Nhleko’s own admission, clearly limited because it does not pronounce on things like whether costs were inflated, supply chain rules flouted, or if there was political interference. Its only focus was whether or not Zuma would have to pay back the money.

Is it a firepool or not?

Nhleko reminded those present that Madonsela’s report alleged that Zuma unduly benefited from security upgrades to the tune of millions of rands.

The expenses for the president’s so-called firepool amounted to just under R4-million. According to public works proposals on security upgrades, the ‘proposed swimming pool is to be used as a reserve for firefighting.’

The SIU report references a spreadsheet that states that the firepool was not required or requested by Saps or SANDF, but later the Saps and the SANDF included a firepool as an alternative for firefighting.

All the huts at Nkandla have thatched roofs, and are close to each other. Equipment must be able to detect if a fire starts up, and fire equipment is essential, and must be on site. The local water pressure, though, is weak. Nhleko said the firepool is therefore the best option for Nkandla, as its first use is to fight fires, and the secondary use is recreation.

On 5 February 2015, an exercise was undertaken to establish the time it takes for the local Nkandla fire and rescue service to react to an emergency at Nkandla. The reaction time was at least an hour and 10 minutes after the call, said Nhleko.

In terms of the cattle kraal and chicken run, the report states that allowing animals to roam around would have triggered continuous false alarms and rendered the entire security system ineffective. Therefore they had to be put into an enclosure.

With regard to the perimeter protection and entrance gates, the original police appraisal stated that there should be a brick and mortar wall fitted with an electric fence, and the fence must be divided into zones, with CCTV cameras and infrared motion detectors along the fence in sensitive areas.

The visitors’ centre and control room were requested by the SAPS. The former is situated on top of the latter at Nkandla. While at home the president receives visits from high-profile guests as well as members of the community, so security risks must be mitigated and at the same time executive and high-profile guests have to be received in a suitable manner. The visitors’ centre fulfils this purpose.

The amphitheatre is not really an amphitheatre. The president’s home stands on land with a gradient of about 40 to 70 degrees and is susceptible to flooding, Nhleko explained. Stabilisation and reinforcement of the ground were necessary and a number of soil retaining walls had to be constructed.

The retention walls at Nkandla’s amphitheatre had to be strong in order to retain ground that carries the main homestead internal road, and are therefore considered a security feature because they need to support heavy duty vehicles, such as heavy fire fighting trucks, armoured personnel carriers, Nyalas and VIP vehicles.

The amphitheatre also serves as a primary emergency assembly point. Public protector Thuli Madonsela, from whose report Nhleko’s probe stemmed. Madonsela had recommended in her report, that Zuma should repay a portion of the upgrades to his private residence. Image source: Corruption Watch

Nhleko referred to an implied presumption of impropriety in the public protector’s finding in that some structures were “non security comforts”.

He said it was also evident from available information that communication within the project team was poor, and that the various investigation teams did not share a common definition of what constitutes security upgrades and their relevance.

“Accordingly, the state president is therefore not liable to pay for any of these features,” Nhleko said. “Outstanding security and security related work at Nkandla should be funded and completed expeditiously.

“This report is hereby submitted to and tabled for consideration by Parliament.”

Excerpt
President Jacob Zuma does not have to pay back any of the money – this was announced in a 51-page report released yesterday by Police Minister Nathi Nhleko, at a press briefing punctuated by educational videos on the use and meaning of various features at Nkandla.
File Upload 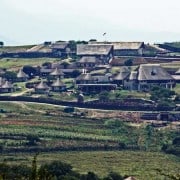