Delivering what is arguably his most anticipated State of the Nation Address (Sona) to date, President Jacob Zuma on Thursday dithered around the topic that has many South Africans concerned about the future of his government: corruption.

On several occasions he referred to achievements of government that translate into a “good story to tell” for all South Africans, but the specific applause he usually reserves for the country’s corruption-busting institutions was a noticeable omission from Zuma’s speech.

The Hawks, the Special Investigating Unit (SIU), Asset Forfeiture Unit and the Anti-Corruption Task Team – which have in the past been singled out by name for their achievements in their respective mandates – did not feature in the speech. Instead Zuma made an vague reference to the work of the anti-corruption inter-ministerial committee, a grouping of ministers in the crime and justice portfolios who are tasked with developing anti-corruption strategies for government.

“The fight against corruption continues to be taken forward by the anti-corruption inter-ministerial committee,” said Zuma. “Government has in place seven anti-corruption institutions and 17 pieces of legislation which are intended to combat corruption. This demonstrates a concerted effort by government to break the back of this scourge in the country.”

The president did note that 52 convictions related to corruption cases costing up to R5-million in total had been secured in the 2013/14 financial year. A further 31 were jailed in the first quarter of the current financial year. “Freezing orders to the value of R430-million were obtained,” said Zuma.

In previous years, Zuma has made a point of mentioning the corruption busters by name, emphasising on several occasions their ability to co-operate in the inter-dependent nature of government’s anti-corruption strategy.

Of the SIU, Zuma said in his pre-elections 2014 Sona: “The SIU is investigating maladministration or alleged corruption in a number of government departments and state entities, through 40 proclamations signed by the president during this administration. We will keep the public informed of the outcome of the investigations.”

The unit is now without a permanent head, following the January resignation of Vas Soni, who had been at the helm of the unit since September 2013. Although Soni cited family obligations as his reason for leaving the unit after only 16 months, certain media reports have alluded to possible pressure for having presided over the SIU’s investigation into excessive renovation costs at Zuma’s private home in Nkandla.

“I think it has been stressful and it’s a serious challenge,” Soni told eNCA upon his resignation announcement. “… I had spent almost my entire working life in the private sector and did not realise what a challenge working in the public sector is.”

Zuma, however, had praised the SIU in the February 2013 Sona: “The Special Investigating Unit, the Anti-Corruption Task Team, the Asset Forfeiture Unit and the Hawks have made notable progress in our quest to combat corruption in society broadly and in the public sector. This work will continue in the next five years.”

The Hawks unit is even more troubled. Its head, Anwar Dramat, was suspended just before Christmas last year pending an investigation into alleged illegal renditions, or extrajudicial deportations, of Zimbabwean nationals several years ago, according to police minister Nathi Nhleko. The Constitutional Court overturned Dramat’s suspension earlier this year. Despite this, however, he is not back at work but is in talks with Nhleko.

When speculation arose that the two men found themselves in the positions that they are in because of their involvement in the Nkandla probe, Zuma’s office denied this and issued a statement in January saying the Anti-Corruption Task Team (ACTT) was still intact.  By virtue of being leaders of the two anti-graft bodies, both Dramat and Soni form part of the ACTT.

"South Africa has a strong anti-corruption architecture," Zuma’s statement read. "With co-operation between government, the private sector, non-governmental organisations and political parties, we will be able to make a difference in eradicating corruption which is what our people expect of us."

Zuma noted that the legal parameters within which corruption is being dealt with are sufficient. “To prevent corruption and promote ethical governance, in December I signed into law the Public Administration and Management (PAM) Act which amongst others prohibits public servants from doing business with the State.”

The Act has been hailed by some and received with caution by others. Corruption Watch recently reported that the Centre for Constitutional Rights noted the Act’s non-compliance with the Constitution, because it applies to public servants and municipalities but not to organs of state and public enterprises – which is a violation of the Constitution.

Earlier in the evening the Sona proceedings had been disrupted and delayed for close to an hour. Zuma’s address was only a few minutes in when Economic Freedom Fighters MPs began demanding that he answer the question of when he would pay back the money for the excessive spending for renovations at his Nkandla home.

Members of the party were removed from the joint sitting of Parliament, followed later by an exodus by the DA MPs who decried what they said was the possible use of members of the South African Police Service to remove the EFF MPs.

Zuma did not address the disruptions prior to resuming his speech, but there were mixed reactions from dignitaries attending the Sona to the forced removal and walkout.

"A strong leader would've said something and made a joke or something, he did not," Freedom Front Plus leader Pieter Mulder said. "He inspired no real hope in his speech, he just said old things over again."

"At a time when South Africa is in crisis, the constitutional role of Parliament has been severely undermined today, and the real issues that matter to South Africans have been forgotten," DA parliamentary leader Mmusi Maimane said in a statement. He added that while the EFF was wrong not to abide by the request to desist, it was equally wrong to have had riot police brought in.

ANC secretary-general Gwede Mantashe was predictably scathing. "We have been watching the race to the bottom by opposition parties where they are actually outdoing each other… Anarchy will never [build] a nation," he said afterwards.

Excerpt
In his 2015 State of the Nation address, President Jacob Zuma dithered around the topic of corruption, which is a major concern for many South Africans. Without singling out anti-corruption institutions as he has done in the past, Zuma merely spoke vaguely about the anti-corruption inter-ministerial committee’s work.
File Upload 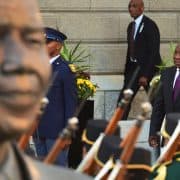 CW is amicus in EFF vs Speaker ConCourt case 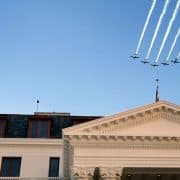 Party manifestos - do they walk the talk?