Barely a month after the Constitutional Court (ConCourt) held that the South African Social Security Agency (Sassa) and its acting CEO should be liable for costs relating to a second contract extension with grants distributor Cash Paymaster Services (CPS), the same court has now handed down unanimous judgment on then social development minister Bathabile Dlamini’s personal liability in the matter.

The court has ordered that Dlamini, in her personal capacity, must pay 20% of the costs of the applicants’ legal fees, including the cost of two counsel. The case was brought by Freedom Under Law and the Black Sash Trust, with Corruption Watch as amicus curiae. The parties have been fighting for justice in the Sassa case since 2013.

The minister of social development, and Sassa and its CEO are to pay the 80% balance. The amounts have not been disclosed.

Justice Johan Froneman did not mince words on Dlamini’s behaviour. He said she misled the court to protect herself and so, to prevent the same situation from happening again, Dlamini must be accountable for her part in the sorry saga.

Froneman also ordered the National Prosecuting Authority (NPA) to read Judge Bernard Ngoepe’s report on the findings of an inquiry into Dlamini’s conduct, over which Ngoepe presided. The ConCourt registrar would send the report to the NPA for them to consider whether Dlamini lied under oath – if so, she should be prosecuted for perjury. Froneman said she had withheld information from the court.

Ngoepe’s inquiry was established in terms of section 38 of the Superior Courts Act, which deals with the appointment of a referee to conduct an investigation or examination which the court is unable to conduct. That referee’s report would then have effect as if it were a finding of the court itself.

The section 38 investigation was tasked specifically with investigating whether Dlamini had personally sought the appointment of individuals to lead work streams which ran parallel to Sassa’s normal processes but reported directly to her.

Dlamini had indeed allowed a parallel process to take place, Froneman held. Recently the National Treasury determined that the work streams were irregularly appointed and furthermore, had cost the country nearly R50-million.

Ngoepe had also found that Dlamini had been evasive during her testimony. She had not disclosed this information as she feared being held personally responsible and ordered to pay costs. “The inference that she did not act in good faith is irresistible,” Froneman said. “At best for her, her conduct was reckless and grossly negligent.”

In a March 2017 judgment, the Constitutional Court ordered Dlamini to give her reasons, in an affidavit, why “she should not be joined in her personal capacity; and she should not pay costs of the application from her own pocket.” This, the court held, was because “individual conduct may have played a material role in the matter”. Dlamini was joined in her personal capacity to the case in June that year.

The same judgment reprimanded Dlamini for her handling of the Sassa debacle, which saw CPS’s contract extended even though it had been found in 2013 to be invalid, because Sassa had no alternative plan or provider and was unable to itself take over the task.

“The Minister bears the primary responsibility to ensure that Sassa fulfils its functions … The office-holder ultimately responsible for the crisis and the events that led to it is the person who holds executive political office.”

There have been claims that the company has reaped up to R1-billion in profit over the erratic course of its contract with Sassa.

In August 2018 the court handed down judgment in relation to costs for the order handed down in March, which granted CPS a second extension to pay social grants.

In March 2018 Sassa urgently approached the court for a further extension to the CPS contract. This was granted for another six months, although the court was not pleased with Sassa’s application.

The court was placed in an “invidious position last year,” said Justice Leona Theron, handing down the unanimous judgment four weeks ago, because of Sassa’s failure to take over the social grant payments. Beneficiaries could have been prejudiced if the extension was not granted, and their rights had to be balanced with the – at best – incompetent actions of Sassa.

Theron ordered former acting Sassa CEO Pearl Bhengu, in her official capacity, and Sassa to pay costs – including that of an advocate and two counsel – for the March 2018 application to extend the CPS contract.

The urgency was self-created and therefore, said Theron, “The applicants must bear the costs of the application.”

Furthermore, she said, Sassa had been “neither candid nor complete” in its application. 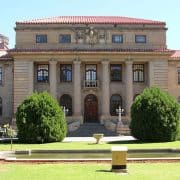