On 1 April in Ekurhuleni, the Gauteng provincial government held a bid adjudication session that was open to everyone – marking the first time that the adjudication of a tender was conducted in public in Gauteng. The tender is for the upgrade of a portion of the busy Cedar Road.

The provincial finance department is piloting the revised tender process, together with the Gauteng Department of Roads and Transport. The open tender project aims to restore public confidence in government tenders, procurement, and spending.

At the launch of the project in November 2014, Gauteng finance MEC Barbara Creecy said that allowing public scrutiny would provide evidence that the award process is fair and transparent.

She said at yesterday’s meeting that it had not been an easy task thus far. “For us as Treasury, one of the challenges is finding the capacity to do the oversight.” She added that there was still much training needed, but that she was confident of getting all the processes in place by the end of the current five-year term of office, now almost a year in.

“We’ve learned a lot about our own processes along the way. And the premier is committed to rolling out the project in Gauteng.”

Creecy and transport MEC Ismail Vadi observed the process from the public gallery in the Ekurhuleni concil chamber, but did not get involved.

The banking tender is the next to be publicly adjudicated. After this, Creecy and Vadi will submit their evaluations for inclusion in the revised tender process. This document will be submitted to the Gauteng Executive Council for adoption, and Creecy expects that it will launch across the provincial government during the current term.

Everything out in the open

Members of the bid adjudication committee (BAC) stated up front that they had no vested interest in the awarding of the tender.

The public was then taken by members of the bid evaluation committee (BEC) through the steps of the scoring process. The names of the 12 bidders had previously been made known at the public opening of the tender box, and were also posted on the open tender web page. They are Lonerock Construction, Tshenolo Resources, Lubbe Construction, Fountain Civil Engineering, Lebaka joint venture, King Civil/Ludonga joint venture, Sedrade, Gorogang Plant Hire, Down Touch Investments, Mivami Construction, Power Construction and Phagama Civil Maintenance.

The bids ranged from R73-million to R99-million. The department had budgeted R90-million for the project, of which a third will be provided by elite property development Steyn City in a public-private partnership. One of the Steyn City gatehouses is located on Cedar Road.

The bid evaluation committee stated that, after all the processes had been duly followed, just one bidder met all the financial, functional and empowerment requirements– this was Power Construction whose bid came in at R96-million. Power’s was the second most expensive bid, but the shortfall of R6-million should not be a problem, said the BAC.

Power Construction was thus the BEC’s recommendation to the BAC, which unanimously endorsed it. The recommendation now sits with Gauteng roads and transport’s head of department, Ronald Swartz, who will make the final decision.

One of the new developments in the open tender process is the introduction of a probity audit for all tenders with a value of more than R50-million. This was conducted by an independent probity team, which submitted a report that was in the pack of documents given to the BAC on Wednesday.

One or two flaws in the process were exposed, leading the BAC to recommend that wording in adverts be as detailed and specific as possible in terms of specifications and evaluation criteria. The BAC also commented that, for the sake of maximum objectivity, the process should make it easier for evaluators to give an accurate score for relevant experience of bidders. For instance, where a bidder had engineering experience related to water projects rather than roads, evaluators were unsure whether to credit them for this or not.

The Cedar Road tender box was opened immediately after the deadline for submission of bids, at 11h00 on 20 January. The bids were registered and imprinted and the prices were announced.

The Department of Transport’s BEC, with guidance from the provincial Treasury, conducted an initial screening of the bids followed by an evaluation of functionality, experience and ability to deliver. Based on this, it drew up its recommendation for consideration by the BAC.

The independent probity team audited the whole process from the closing of the tender to the evaluation.

Excerpt
Yesterday the Gauteng provincial government held a bid adjudication session that was open to everyone – marking the first time that the adjudication of a tender was conducted in public in Gauteng. The open tender project aims to restore public confidence in government tenders, procurement, and spending.
File Upload 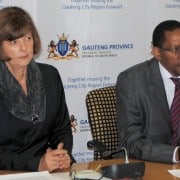